Enthusiasm for the Rugby World Cup is reaching fever pitch. Laws have been passed to allow breakfast-time trips to the pub, Fonterra has gone next-level ‘innovative’ and ‘value-added’ with their black milk, and here in Auckland’s Department of Physics we are dealing with nationalistic fervour resulting from a $2 sweepstake draw. 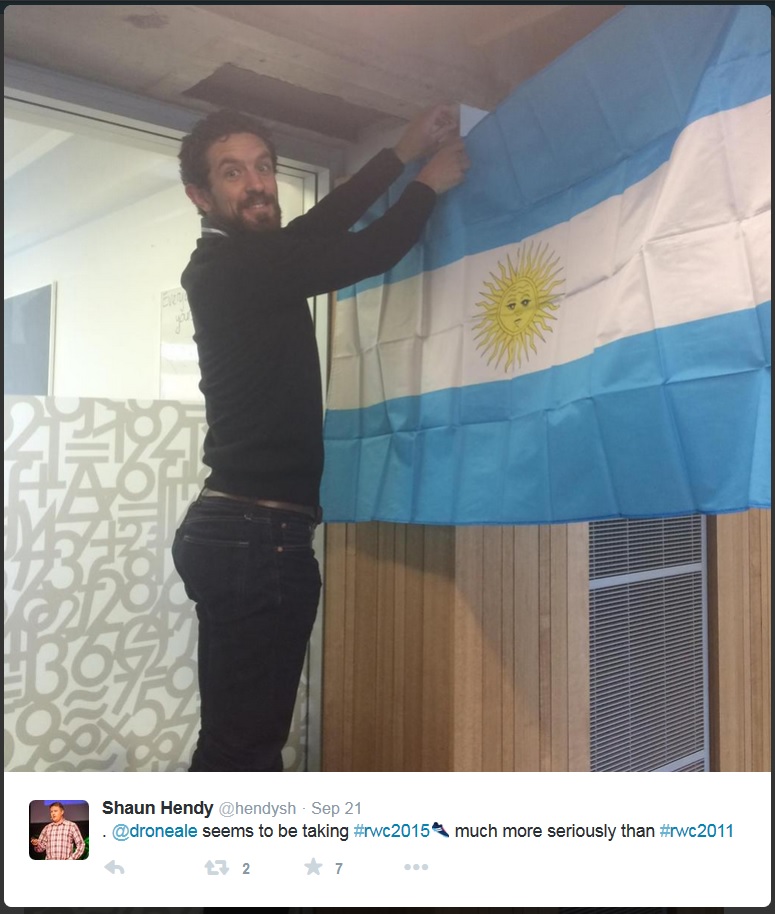 So, in a blatant display of personal* and professional opportunism, I’m going discuss how physics crops up on a rugby paddock. I’m not aiming high: just something better than the Herald sports section. Maybe it will contribute to a coffee table discussion, or a lesson plan. For the first instalment, we need to talk about Keven.

The coolest TV innovation that emerged during the 2011 World Cup was probably the use of the Spidercam. Specifically, the top-down view of the scrum literally added another dimension to the way we watch this aspect of the game. 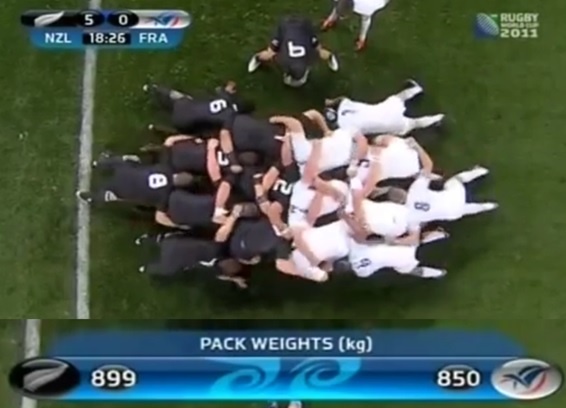 If you haven’t spent the last 15 years under a rock, without any access to Weet-Bix, then you’ll know that 127-test All Black Keven Mealamu is wearing black with a number 2 on his back. Both the All Blacks (wearing, er, black) and France (wearing white, known as Les Bleus, c’est la vie) want to push their opponents backwards (left to right). Here you can spend 7 minutes reliving every scrum from THAT 8-7 final at Eden Park. Scrums are awesome.

All I want to do here is talk about the vector diagram of forces acting on a front-rower. We represent a force by a vector: an arrow with length proportional to the strength of the force, pointing in the direction of the force. When more than one force acts on the same object, the total force can be found by joining all the arrows base-to-tip in succession, then finding the ‘resultant’ arrow from the base of the first arrow to the tip of the last.

Figure A shows the forces acting on Keven, including the force he’s providing by pushing himself. There’s a force pushing him from behind, and une force bleu pushing in the other direction. Putting the force vectors base-to-tip, the sum is about zero (Figure B). Newton’s first law (an object which is at rest will remain at rest, unless acted upon by an external force) tells us that we need some total force to move (accelerate) Keven, so we can tell that Keven is not about to move very quickly to the left or the right. This is what we’d expect, because scrums don’t go anywhere in a hurry.

However, Keven certainly feels the forces acting on him. We can figure out the pressure (force per area) acting on his shoulders by estimating the forces applied by the opposition. There’s 3 or 4 French players directly in front of Keven, pushing on his shoulders, so I reckon that if they can generate 3 or 4 body-weights worth of force, that will be about 20 MPa pressure. (Have I got it right? How big are Keven’s shoulders anyway?). This is about 200 times atmospheric pressure, equivalent to the pressure inside a scuba tank, or under a stiletto high heel. So Keven, who is 1.81 m tall, isn’t getting any taller in a hurry.

If one of the forces acts a little bit sideways (say, 5 degrees), then the vector sum points sideways (red, Figure C). Now there is an unbalanced force, and Keven will accelerate in the direction of the red arrow. The message here is that the scrum is easily destabilized: the players mostly concentrate on pushing from left to right, so they are not positioned well to oppose the red vector. Players, in particular props, can easily upset the scrum by slightly tweaking their body position, their grip, or the position of their feet. An opponent must be very strong and skilled if they want to keep the scrum stable.

Keven is slightly protected by the two players alongside him, but stability is an even bigger problem when you watch the scrum from the usual viewpoint (side-on). Now, each front-rower has to hold themselves up without having two mates buffering the motion in that direction. Also gravity joins the force diagram. This is why scrums are so easily collapsed, and there’s a rule that the front-rowers have to enter the scrum with shoulders elevated above their hips. 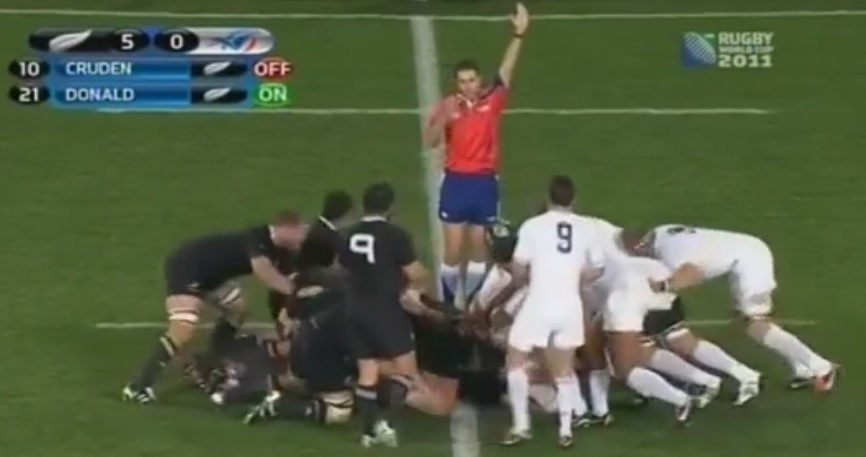 Where do these pushing forces come from? In upcoming posts I hope to discuss how players can choose the length of their sprigs to provide the most force, along with forward passes, spiral kicks, etc. So watch this space and please leave questions / comments / suggestions here or @GeoffWillmott

Source note: My RWC material serializes a Café Scientifique talk first delivered to an enraptured audience of approximately 10 pensioners at Wholly Bagels Lower Hutt during the 2011 World Cup. Much of the material is based on the book “The Physics of Rugby” by Trevor Davis Lipscombe (Nottingham University Press).

* I’m a rugby ref with the Auckland Rugby Referees’ Association.